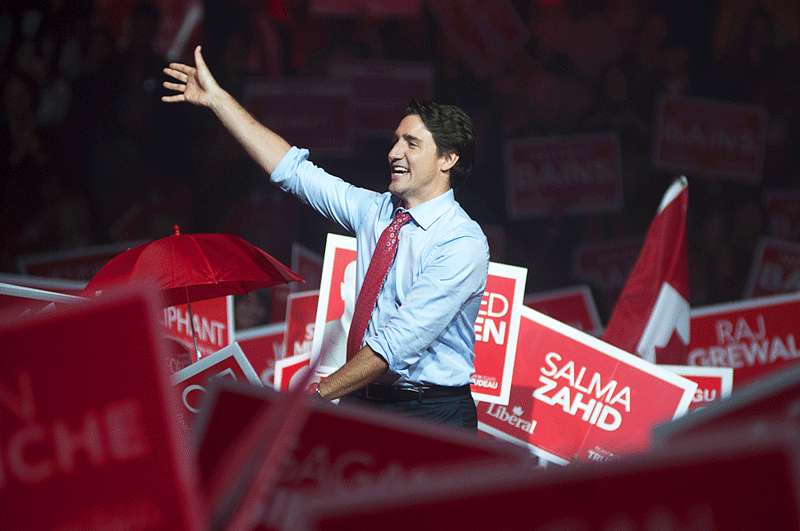 On November 4, Canada’s new Prime Minister made global headlines: Justin Trudeau’s cabinet would be 50% female. He said the diverse group “looks like Canada.”

OMG! For every person who celebrated 50% women, another declared that’s tokenism--- which doesn’t work, isn’t fair, and will lead to DISASTER. Journalists, politicians, your uncle instantly, loudly assumed the 15 women were not qualified. National Post columnist Andrew Coyne said, "So far as we are putting representationalism before ability, we are also asking the country’s interests to take a back seat." Donald Trump: "I wouldn't want that. Because I will tell you: I want the best person at each position... I'm going to get the best people for the job." Perhaps they pictured Trudeau flipping through the phone book and saying, “check!” to the first 15 female names he came to.

The outcry has dimmed somewhat since the backgrounds of these women became known; they’re impressive by any standard, for either gender. With spotlight on this controversial decision it’s come to light that countries like Sweden, years ahead on embracing gender-balanced governments, have reaped rewards. The evidence is out there: groups with gender diversity achieve better policies, judgments and outcomes. Meanwhile, in business: “We know that companies with more gender-balanced leadership teams significantly outperform companies with only men at the helm,” says Avivah Wittenberg-Cox, CEO of 20-first. A landmark book, The Athena Doctrine, makes a powerful case for a female style of leadership (i.e. less ego-driven, more open, more empathetic, better at risk management, transparent, inclusive). Reams of data and endless case studies prove that in governments and businesses, it leads to more innovative, effective problem-solving.

"The evidence is out there: groups with gender diversity achieve better policies, judgments and outcomes."

Could this possibly apply to our industry? Is it really batshit crazy to strive for 50% women in the most influential jobs in ad agencies? Or even, 50% women on the juries that decide who gets their ego stroked with a gold statue? When ADC put out a 50/50 jury challenge to awards shows in 2013, the response was not unlike the 50% decision announced by the Canadian prime minister. It’s tokenism. It will mean bad results, when people who aren’t qualified get voting devices put in their hands. Both men and women rolled their eyes, and argued merit is the only way to go.

Although ADC and the Clios lead with their 50/50 jury policies, virtually every major show has increased the number of women on their juries, and the world hasn't come to an end. Have you heard even one complaint that a more gender-balanced jury came to a bad decision? Not me.

"Have you heard even one complaint that a more gender-balanced jury came to a bad decision? Not me."

Like Mr. Trudeau, awards shows must make considered choices when they choose their men and women. Like Mr. Trudeau, awards shows will find the best female candidates may not be household names. The industry needs to get past its narrow definition of a “good” jury member. “Good” meaning “famous”. A certain number of years in the business and the right title on the business card. The right awards in the right quantity.

The simple fact is there are dramatically fewer women that check off all those boxes because there is a mass exodus of women from the ‘up’ escalator before they hit their greatest potential. This has been true for decades, with common reasons including status plunging after baby, ghettoization of women on businesses with less opportunity for their career growth, and conscious and unconscious gender bias still plaguing the workplace. Awards shows--- and agency leaders filling top jobs--- would do well to look at the less experienced, lesser-known gems; great women who will make excellent choices and in no way represent “compromise”. The fact is there is no shortage of women who excel, so there’s no need to punt to “tokenism”.

Whether you’re the Prime Minister of Canada, an ad agency C-level exec or an awards show chair, the reasons to choose 50% women for critically important positions are about the same:

Nancy Vonk is a co-founding partner of Swim, a creative leadership lab. Along with Janet Kestin, she was co-CCO of Ogilvy & Mather Toronto for 13 years. She served on juries including Cannes, ADC, One Show, D&AD and CA, and chaired shows including the ADC Global Awards. She is a board member of The One Club. She and Janet co-authored HarperCollins best-selling Darling, You Can’t Do Both (And Other Noise To ignore On your Way Up), a guide to breaking invisible rules of business that hold women back. She speaks regularly about gender issues at companies and schools including Facebook, Google and UCLA.